As Benjamin Franklin once wrote “Our new Constitution is now established, and has an appearance that promises permanency; but in this world nothing can be said to be certain, except death and taxes.”

This phrase has now entered everyday life, usually at the end of the month when an employee sighs while reading the monthly payslip. 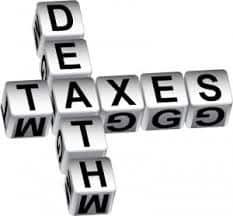 Are taxes certain on death with UK pensions?

Well, if you believed the adverts for QROPS, you could be forgiven for thinking so!

The new pension rules for the UK came into force this week and they are a game changer for taxes on death. In the past, many offshore firms recommended transferring to QROPS to save 55% tax. This, apparently, being the main justification.

In many cases, a cost effective life insurance policy would have been far cheaper than the costs of moving a pension offshore, with the ongoing running costs. Not forgetting that many that were moved lost valuable guarantees that will leave transferees all the poorer in retirement.

One would have thought that that offshore advisers would mention the opportunities for tax planning on death, given the new UK rules. However, it is clear that the new 45% tax rate on death for the over 75s is being given as a reason for middle aged expats to move their pension now- even thought the rule applies only until next year!

How ridiculous it that?

That rate only applies until April 2016 and then the tax will depend upon the personal tax rate of the beneficiaries- which may be zero.

When funds are retained in a pension, rather than being paid out in a lump sum, all the tax advantages can be retained: limited tax on investment income, no Capital Gains Tax, no Inheritance Tax.

If the family members or other beneficiaries are non-taxpayers they can take out money- tax free- up to their UK personal allowance each year. So, being able to pass on any unused funds on the death of the pension holder and having unfettered access whenever required means that there is no reason to withdraw funds until they are needed. While the new rules cannot rule out the fact that death is inevitable, tax is not always inevitable.

Expats need to look hard at the new rules before rushing to move their pensions offshore to avoid a tax that may never be payable.