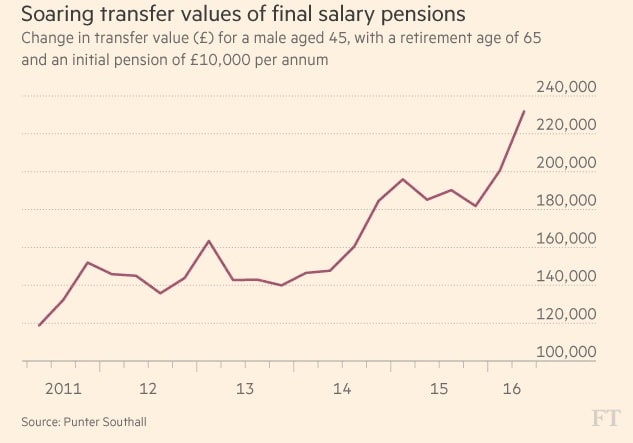 QROPS, SIPP?  – advertised on many offshore adviser websites as a solution to problems that clients did not previously know even existed! The adverts encourage a transfer without considering the facts, and discourage the idea that the pension could be better left where it is. A QROPS or SIPP is not always going to be in the best interests for those with final salary pension schemes.

Transfer values are currently at an all-time high. The Financial Times recently referred to an example in May. Three years ago a pension member had a  value of £540,000 and by the start of the year it had increased to £740,000. By May it was £818,000 and after Brexit was announced the values went up even more. This year alone there have been increases of 25 to 30% .

There appears to be some confusion among both investors and unqualified advisers as to what a final salary transfer value actually relates to. One thing it is not, it is not the individual pension fund of the client. There is only one pension fund and that is the whole scheme for all the members

The value referred to is the Cash Equivalent Transfer Value, or CETV.  It effectively puts a value on the pension benefits accrued in the scheme. To put it another way, you cannot “spend a house” you have to relinquish ownership to get the cash value. The CETV is the value offered to relinquish your final salary pension.

How is this transfer value calculated?

Firstly, the CETV has nothing to do with the markets or the fund value of the scheme (unless the scheme is in difficulty and the value is reduced- but the trustees would inform members if this was the case).

If any consulting actuaries are reading this, I am providing a very basic guide to transfer calculations- so please bear with me.

The Rough Guide to CETV calculation.

The calculations that are used differ from scheme to scheme

“How on Earth is someone like me supposed to get his head around this?”

If we were to make the assumption ( only for the purpose of this example )  that is how CETVs were calculated, it shows that the scheme would not need to invest ( or offer as a transfer value ) as much when rates are higher. So, a rise in inflation may lead to a rise in interest rates in this example, and lower transfer values.

Why ask for a CETV now?

Recently published in the Financial Times- this graph shows why! 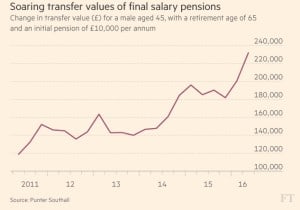 Pension Scheme Members are entitled to one CETV statement a year without charge. While it may not be the best advice to transfer for many, surely it is worth a “look over the fence” to see if there is now a better reason to transfer than before.

QROPS or SIPP – which is better?

You need personalised advice to answer that question. The options are:

We have not suggested that a QROPS or SIPP is the “answer”. Before doing anything, get advice from a registered individual who is regulated in the UK, and make sure you actually speak to the IFA : do not do it through third parties at arm’s length.

This article was published  2nd December 2016