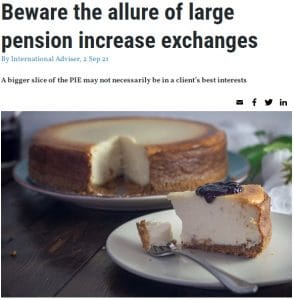 A Pension Increase Exchange is a popular option for many that have accrued benefits in a final salary pension scheme. However, there are implications for the Lifetime Allowance (something we have written about in the past) as well as the Annual Allowance. International Adviser published an article that we wrote, and it is copied here in its entirety.

A recent article that appear in International Adviser referred to pension increase exchanges (PIE) and how a DB scheme member can give up the option for an indexed pension in payment for a higher level initial pension.

And while a PIE may seem like a good option, Aisa International director Chris Lean was compelled to put pen to paper – or, more accurately, finger to keyboard – to highlight some of the potential pitfalls that were not raised in the original article.

PIEs could be attractive for a number of reasons, he writes. Perhaps it would help provide an important level of income to bridge the gap until the state pension or other pensions become available.

Some may also take the view that the need for higher income is greater in the first years of retirement among the so-called ‘younger retired’.

However, there are potential consequences for some that may affect the decision to accept the PIE on offer.

I am referring here, in this article, to larger DB pensions that offer a generous PIE.

Both active and deferred members could potentially trigger an Annual Allowance charge by accepting a large increase to their initial DB pension income.

It could be that this is larger than expected and if there is insufficient carry-forward to mitigate this increase, there could be an AA charge at retirement.

Further, deferred members could also be affected although there is a ‘carve out’ where they could claim to have no pension input amount.

These members will benefit from no pension input amount if the increase in pension does not exceed the total of the ‘relevant percentage(refer to scheme rules)’ and the ‘relevant statutory increase percentage.

If these amounts are exceeded, then the ‘carve out’ will be lost and the increase will create a pension input amount to be tested against the AA.

At retirement, the DB pension is tested against the LTA based on the benefit crystallisation event- in the case of DB pensions it is usually 20 times the initial pension.

There are different rules as to how the benefit accrual is calculated for Enhanced and Fixed Protections, but a substantial increase in initial pension as a result of a PIE could be deemed as benefit accrual.

The loss of either could result in those with pension values, above the prevailing LTA, paying a large LTA charge.

While, on the face of it, a generous PIE may seem attractive it is clear that for some there could be unexpected consequences of accepting a larger initial pension.

As is often the case, unless the DB member understands the rules (which are not covered in any great detail here), it is likely that advice taken before acting could be seen as a good investment.

This article was published on 6th September 2021