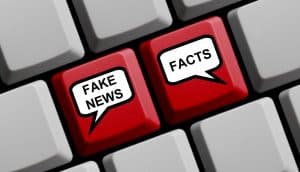 Nowadays we are bombarded by facts and opinions as media has now evolved from traditional sources, such as newspapers, to instant online news and “information / advice”. However, the authenticity of online views is questionable- are they pension facts or fake news?. The expression “fake news” may be relatively new, but it is clear that a lot of articles promoting expat pension advice and pension facts are often misleading and the information / advice is often wrong. How do these pension facts or fake news bend the truth?

The Biggest Cons Are Sometimes The Most Effective

If you are going to tell a lie, make it a big one!

We all remember the Brexit campaign with £350 million a week to be given to the NHS after the UK leaves the EU, quickly found to be questionable at the very least. While it is probably true to say that most people did not believe that this money would be available to that extent, it did influence the result as it got across the idea that there would be money freed up to provide additional services to  a highly valued British institution.

This really is the aim of Pension Facts or Fake News. The published story is based on a concept that appeals to people so much so that, even where they do not completely believe it, they are keen to follow the advice.

If somebody promises a guaranteed return on an investment of 15% pa, simply by transferring a pension to the ‘can’t fail’ investment, many people later admit to us that they never really believed it in the first place. So why did they transfer their pensions?

While they did not necessary believe guaranteed return of 15% pa was achievable, it indicated to them that they would get a higher return than another investment that guaranteed a 4% pa return.

Our empirical evidence suggests that although people generally feel that 4% pa is probably realistic, they would still rather invest in something promising higher (and less realistic) returns!

Hence the success of so called pension facts or fake news.

A recent article in the  Financial Times  looked at the effect of facts presented to the public, pointing out that facts do not always speak for themselves and often need championing. The article referring to such people as Carl Sagan and David Attenborough who would encourage and enthuse people to look beyond the facts.

This also can be applied to pension facts or fake news, as facts are used to encourage people to take action that they make not have taken before they had read the said facts. Some of the facts are partially correct, and sometimes the pension facts presented do genuinely require action by a pension holder to provide a better retirement outcome. However, the caveats are often missed out and the reader is not provided with the full picture.

Whenever there is a counter argument to the pension facts, it is often the persistence and repetition of the myth that prevails. Money spent on heavy advertising pays off, and none more so than in the world of offshore pensions and pension advice.

Let’s look at some of the main facts that are presented to expats, about the choices they have, when they are sold the idea of a QROPS.

Anyone transferring based on these pension facts or fake news, without looking further, may live to the regret it.

We have written about this in the past

Expats in the EU are now being told that their window of opportunity to transfer may be closing when the UK leaves the EU. In fact, this may be true, HMRC may well impose the Overseas Taxation Charge on those in the EEA that transfer a UK pension to a country that does not have their own QROPS. Potentially limiting the transfer to those tax resident in Eire, Gibraltar and Malta.

However, give someone a deadline or tell them that they could lose out on something and there is a danger that they do not look behind the facts. As the article referred to in the above link shows, if a transfer to a QROPS is not going to be good advice then nobody is losing out on anything by not transferring before Brexit.

We are now seeing firms claiming a large demand from expats in the EU that want to transfer their pensions to QROPS while they still can before Brexit. Our own experience tells us this is not the case, the facts are that only those with a vested interest in selling QROPS seem to be making this claim. Of course, present the myth as fact, and repeat it often enough, and the demand may surface- but at what price?

This article was published on 18th April 2018